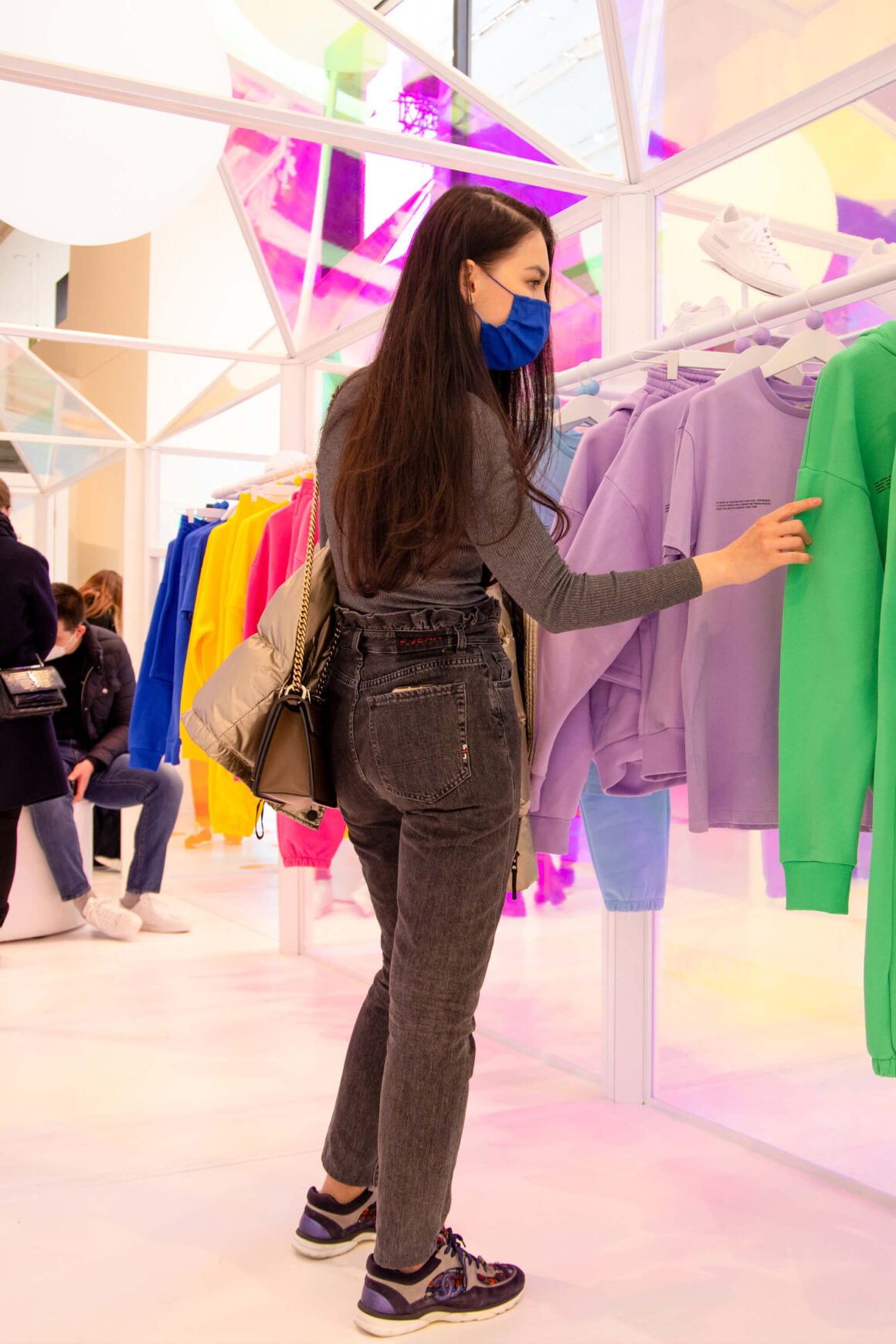 As pandemic restrictions and lockdowns ease in some parts of the world, intent to buy sustainable fashion is increasing, but barriers such as price, availability and information still stand in the way, according to data collected by the Condé Nast Global Custom Insights Team that surveyed Vogue audiences worldwide.

Through the Vogue Audience & Sustainable Fashion Tracker, Condé Nast sought to explore Vogue audiences’ understanding of sustainability and how they engage with sustainable fashion through three surveys conducted in May 2020 (of 2,733 consumers), October 2020 (1,859 consumers) and May 2021 (1,537 consumers). Responses were collected from Vogue internal databases, WeChat and third-party panels. Consumers surveyed represent a global audience from regions including China, France, Germany, India, Italy, Japan, Mexico, Russia, Spain, Taiwan, the US and the UK.

The research shows an increase in Vogue audiences who say sustainability is an important factor when making a fashion purchase, from 65 per cent in October 2020 to 69 per cent in May 2021.

More notably, the survey showed the role that brand loyalty plays in customers’ sustainable shopping journeys. According to the insights team, respondents want the brands they already love to become more sustainable, because they would rather keep buying from their favorite brands than change to alternative sustainable brands. This spells opportunity for established brands to invest in sustainable practices in order to maintain that loyalty. It also gives brands room to experiment with sustainability, even if they are not always immediately successful; customers are likely to remain loyal if they see brands making a legitimate effort to improve. “It’s like an A for effort. Especially if you tell a good story that is persuasive to consumers,” says Sucharita Kodali, principal analyst from tech research firm Forrester.

“Consumers, for the most part, don’t expect brands to transform overnight when it comes to sustainability,” says Scott Clarke, VP at digital consultancy Publicis Sapient. “However, they are looking for incremental change and for the brands they love to lead by example. Moreover, they expect their brands to be authentic and transparent throughout this process.”

However, that loyalty may be declining in some key markets. In May 2021, there was a significant uptick in respondents in China who answered that they were willing to switch from preferred brands to other brands that are proven to be more sustainable. Taiwan, Japan, Italy, Mexico, Spain and the UK saw slighter increases. Where the loyalty remains, there’s no indication of how long it will last. Analysts say that if brands don’t invest in better business models, they may be gambling their future if the tide does turn toward sustainability and they’re not prepared for it.

“In the future, brands won’t be able to rely on such ephemeral things as loyalty to survive such seismic changes,” says Clarke. “With consumers accepting more accountability for their choices across the end-to-end value chain, there is an opportunity, if not an expectation, for fashion brands to step up and inspire, empower and nudge consumers to make more sustainable choices.”

Despite customers caring more than ever about shopping sustainably — particularly Gen Z — there has been little data to support that sentiment in terms of shifts in shopping patterns and sales figures. The Vogue survey indicates that the way customers view sustainability is more nuanced.

They may be more prepared to shift the way they consume clothing, rather than focus on the clothes themselves — being more open to reuse or rental, for example, and potentially less willing or able to invest the time in learning how to evaluate the sustainability metrics of different garments. They want fashion to be more sustainable, but they don’t want to be — nor can they be — fully responsible for making that happen. They want policymakers to take action. And it’s possible people would be more willing to align their shopping behaviour with their desire for sustainability, and pay more for it, if they were armed with more information and felt they could trust what brands tell them. However, rampant greenwashing and the lack of transparency in fashion leave consumers skeptical and unable to know whether a garment’s eco claims and price tag are justified by sustainable practices.

“Changing behaviors at scale is extremely difficult, and consumers often need help to move from intention to action,” says Clarke. “As much as smart metre companies keep telling us the power is in our hands, to save the world, the fashion industry has the controlling stake in macro-social issues such as global warming, biodiversity and pollution.”

Earlier this year, Zalando published a report on the attitude-behaviour gap, acknowledging people’s “tendency to over-report socially desirable sentiments”. The company found while 60 per cent of survey respondents said transparency is important to them, only 20 per cent actively seek out information as part of the purchasing process; 53 per cent believe ethical labor policies are important, but only 23 per cent investigate what those policies are; 58 per cent believe they should understand the product, including the materials, but 38 per cent regularly check the label for information; and 60 per cent of consumers say repair, second-hand and sustainable disposal are important to them, but only 23 per cent repair their own clothes and 25 per cent regularly buy second-hand.

Hurdles stand in the way for customers, as outlined in the Vogue survey. Respondents referenced cost, availability and access to information as barriers to shopping sustainably. Some brands attempt to tackle these barriers head-on by communicating more openly about pricing, for example, or by encouraging their customers to ask themselves whether each garment is worth not just the money they’ll pay for it, but the environmental and social costs of creating it. But so far these brands’ efforts are the exceptions, not the rule.

Brands shouldn’t use a lack of behavioural changes as a reason to avoid working towards a more sustainable future. Doing so could backfire, says Kayla Marci, market analyst at retail market intelligence platform Edited, particularly for consumers who cite cost as their reason for not shifting to more eco-friendly brands but may be in a position to spend more down the line. “They may be unable to afford more sustainable businesses at the moment, which risks losing loyal and future customers if these brands don’t evolve their processes to be more ethical and environmentally friendly,” she says.

Vogue readers also reported wanting the onus not to be on them, but on brands and governments to drive sustainability. Advocates have long said that it’s policymakers’ responsibility to require the industry to do better because the voluntary approach hasn’t worked. Some efforts are underway, in Europe in particular, that could change the landscape significantly, depending on government uptake. The UK is exploring consumption-based emissions targets, which could encourage people to buy fewer products including clothes — a path many advocates argue is the only true path to sustainability — while some EU countries are working on mandatory due diligence legislation that could impact what brands are responsible for in their supply chains.

In the meantime, there’s little incentive for brands to do better, and that opens the door to greenwashing, says Kodali. However, greenwashing can also backfire for brands if the landscape does change in a meaningful way. “[Consumers] want governments to just tell brands what they are allowed to do, like nutritional labels — but there isn’t that now. It’s a complete wild west of promises and lies that only undermine shopper trust,” she says. “If governments would step in and raise the bar for everyone, it would be a level playing field. But now, it’s whoever does the best job lying.”

Even if there’s no backlash, Clarke advises a carrot-based approach can pay off. “Consumers are becoming wary of being manipulated, and struggling to find brands driven by an unwavering commitment to sustainability rather than profit. There is a huge business opportunity for fashion brands who are able to recognise that it is no longer sensible to measure success solely by growth,” he says.