Who is the next Supreme?

The fashion industry ponders this question as the biggest name in streetwear emebegins 2021 under the ownership of VF Corp., which acquired the brand for $2.1 billion this fall.

Streetwear’s rise in the last decade was palpable, with Louis Vuitton andSupremecollaborating on a collection, Virgil Abloh being named men’s artistic director of Vuitton, and hoodies and logos taking over the runway. Its influence is still evident today as consumers, stuck at home due to lockdowns have grown accustomed to working from home in comfortable apparel and unlikely to ditch it when the pandemic ends.

The segment has come a long way from its beginnings, where designers and founders wanted to make clothes that spoke to them and the people who didn’t associate with the products for sale at retail. Urbanwear brands like Cross Colours, Walker Wear and FUBU, among others, resonated with audiences that weren’t being serviced, much like how Supreme and Stussy serviced the skate community.

Over time, mainstream brands like Tommy Hilfiger and Gap dabbled in urbanwear, street culture and hip-hop; Gap even tapped LL Cool J for an ad campaign that could’ve doubled as a FUBU commercial.

Celebrity-led labels Phat Farm and Rocawear made way for Ecko, LRG and other mass brands available in major retailers, while the birth of labels such as Alife, Crooks & Castles, The Hundreds, Undefeated, Obey and 10 Deep, among others, and retailers like Reed Space and Bodega kept streetwear grounded and less glossy. Nigo’s A Bathing Ape entered the global market, shining a light on streetwear communities outside of the U.S., and showing that the streetwear community is connected worldwide.

In the last decade, the high-street concept merged luxury fashion with street culture, blurring what one considers streetwear. New brands emerged riding the wave when its roots weren’t deep into street and skate cultures, and the word itself segmented Black designers who didn’t associate themselves with streetwear.

So what is streetwear today? Is it still brands inspired by rap, hip-hop and skate and delegated only to T-shirts, hoodies and sweatpants? Today, streetwear is much more. It’s still youth-driven, fun and for the people, but it’s also more mature and varied, as are the pioneers in of the category.

Today, Awake NY, Joe Freshgoods, Chinatown Market and Verdy are among the best representatives of streetwear for their community-centric offerings and output that retains the culture’s essence yet forges its new path. Chinatown Market captures present-day streetwear: rapid and spontaneous collaborations and building community through humor and hype. Joe Freshgoods is a people’s champion talent flying the Chicago flag for his community and fanbase. Like Joe, Angelo Baque of Awake NY is focused on the people and helping those in marginalized communities, while producing premium streetwear that speaks to the segment’s maturation. And finally, Verdy, the man behind Wasted Youth and Girls Don’t Cry, is a champion and ambassador for the Japanese streetwear community.

While the current crop of streetwear brands and creatives like Palace, Brain Dead, Affix, Anwar Carrots, Cactus Plant Flea Market, Pleasures, Does It Even Matter, LFANT, Youth in Balaclava and Ripndip, among others, are upholding the essence of streetwear, there is no doubt that the four aforementioned brands are, in fact, the “Leaders of the New School.”

The New York City native attended Parsons School of Design before working at Nike’s customization store and launching brand ICNY, both of which led to the establishment of CTM. “All of those failures and lessons I’ve had of losing my first company, Chinatown Market is a reaction to that,” Cherman said.

Dan Altmann, current president of Chinatown Market, approached Cherman to be a merchandise partner for an animated series he was working on and the conversation led to Chinatown Market.

Chinatown Market is a nimble brand, with the ability to turn product designs around in 24 hours. At ComplexCon in 2019, their booth had a line spanning across the Long Beach Convention Center from the opening of the event to its closing over the weekend. The global brand is a predominantly wholesale business, offering tie-dye sweats and graphic T-shirts, but its collaborations and novelty items command the most attention.

The brand’s yellow smile logo has been applied on basketballs, soccer balls, ping pong tables, and mini lockers, hearkening to the streetwear labels before it that made fun, novelty items for the home or to own. In 2020 alone they collaborated with Harvey Nichols, Swarovski, Timberland, Faze Clan, rapper YG and even Mike Tyson. The brand’s collaboration with Crocs and Grateful Dead helped introduce new customers to the band and brought hype to the footwear company.

“Partners are looking for us to bring their world into ours and reinvent it, and bring a new perspective to the brand,” they said.

Cherman said, “We have a brand to connect with these kids and not just sell them streetwear. There’s a democratization happening and we want to be a leader of that mentality. Anyone can do it. Look at how we take chances. We’ve been fortunate to inspire kids that have started brands.”

Joseph Robinson, better known as Joe Freshgoods, turned to fashion design as a hobby. It started with rapper Cam’ron, who made pink T-shirts popular in the mid-Aughts and Robinson wanted one of his own, so he made it.

The West Side, Chicago, native spent ample time in the city’s streetwear community, working with Fashion Geek and Leaders 1354 — “Leaders was like college to me,” he said — before establishing his own brand, DBM, which stands for Don’t Be Mad, and teaming with colleagues to start Fat Tiger Workshop.

“When it comes to streetwear, it starts with urbanwear like Sean John and Phat Farm,” Robinson said. “I think a lot of us didn’t know what we were into. I found streetwear and streetwear found me. I grew up around Madison and Pulaski negotiating prices on Air Force 1 sneakers. I discovered streetwear when everyone around the world was discovering it.”

Though Robinson still has DBM — his collaboration with New Balance at the beginning of 2020 says DBM on the tongue — he operates under the Joe Freshgoods name. He aims to produce “young streetwear” pieces under DBM and keep Joe Freshgoods for collaborations and he said he might open up wholesale in the future.

Last year was bookended with collaboration sneakers with New Balance to start the year and Converse to end it. They’re also the latest in an extensive résumé that includes Nike, Adidas, McDonald’s, Red Bull, Mastercard, Spotify, Notre, Hennessy and more.

Last year could be considered a banner year for Robinson for his global outreach, but it’s a culmination of work that goes back to his first time attending Magic and the Agenda trade show, selling $13,000 in product in two days at Great Lakes Tattoo Shop and even hosting as many as 11 pop-up shops in one year. 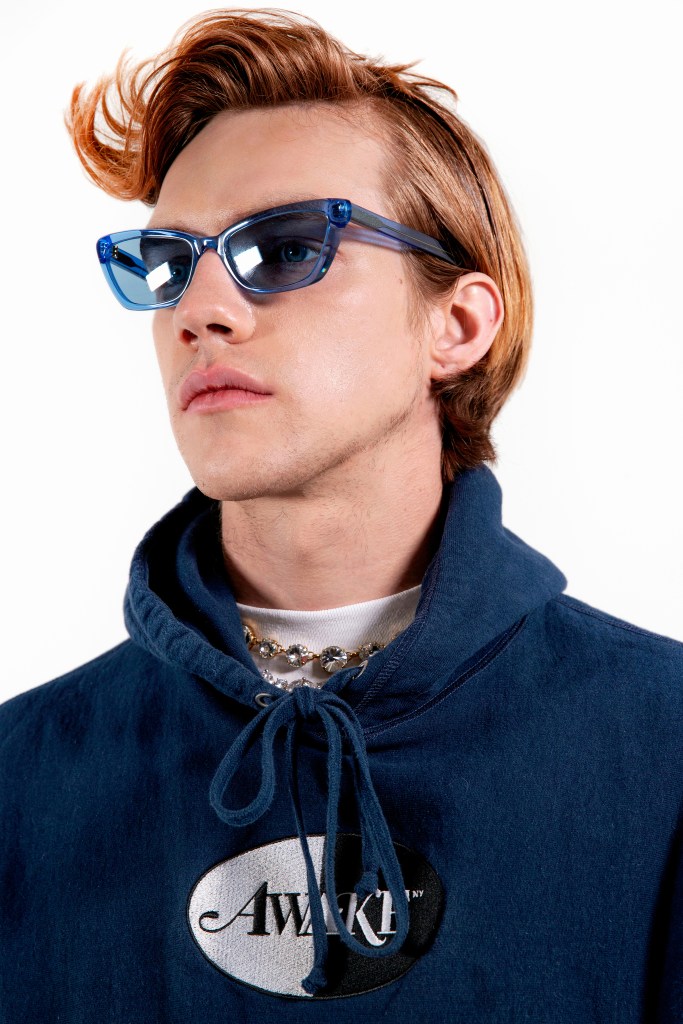 Those unfamiliar with Angelo Baque’s works for his label Awake NY may still already be acquainted with his style.

The former Supreme brand director spent 10 years in that role, leading to the brand’s $1 billion valuation when private equity firm Carlyle acquired a 50 percent stake. He left Supreme in 2016 to focus on his creative work under the Baque Creative Agency and with Awake NY, which he started in 2012.

After turning his attention fully to Awake, Baque expanded the brand’s offering beyond caps and accessories to apparel like T-shirts and hoodies but also knitwear, silk shirting, outerwear and tailoring.

Awake NY is a mainstay at retailers such as Dover Street Market, Kith, Ssense and Roden Gray, among others, and has collaborations with Reebok, Carhartt, Asics, Timberland, New Era, Kappa and Moncler.

Part of the magic Baque brings to Awake is through its product offering that captures the spirit of New York City, but also shines through its work to help local communities and people of color throughout the U.S.

Proceeds of sales from the New Era collaboration that included New York Yankees and New York Mets caps were donated to Queens-based nonprofit New Immigrant Community Empowerment and The Point CDC, a nonprofit organization in Hunts Point in the Bronx dedicated to youth development and cultural and economic revitalization. A graphic T-shirt bearing Vicks VapoRub with the Awake NY logo was sold to raise funds for Building Black Bedstuy.

Though Baque is releasing works when he has something to say, he’s made sure that his output represents people of color, whether it be in campaigns and look books, and benefits marginalized communities — the same people that urbanwear and streetwear was made for.

When discussing Verdy, you could mention his brand and skate team Wasted Youth or Girls Don’t Cry and its collaborations with Nike and Human Made, or you could just refer to him by name and have the same effect.

The Japanese graphic designer and cofounder of VK Design Works produced art work for clubs and bands prior to collaborating with Harajuku streetwear brand Bounty Hunter and establishing Wasted Youth, his ode to skate and punk culture. Girls Don’t Cry is more of a love letter than a brand. He made a Girls Don’t Cry T-shirt for his wife, and expanded on it more when friends and fans began asking for their own.

Products in the resale market with Verdy’s name attached to it will cost you, especially the Nike SB Dunk Low sneakers with Girls Don’t Cry and Vick figurine launches at ComplexLand. But it’s not about hype, it’s about community. How many creatives in streetwear have their own day?

Verdy and his partner, Paulo Calle, hosted Verdy Harajuku Day in 2019, offering collaborations from Verdy with a slew of brands. Last year, Verdy’s mascot Vick, an animated dog character, was paired with Illumination’s Minions from the “Despicable Me” series for a collaboration collection.

But most notable is his connection to Nigo and Jun Takahashi. Japan’s godfathers of streetwear have both supported Verdy, and Nigo, in particular, has collaborated with him on multiple occasions with Human Made. The partnership they have is a symbolic torch passing from the old guard to the new one. The youth today may have missed Nigo’s time at the helm of Bape, but they’re experiencing Verdy, Japan’s new global streetwear ambassador and spiritual successor of Harajuku’s yesteryear.

More related articles: The New Gucci x The North Face Collab is now Available on Pokémon Go, Why 2021 Will be a Bumper Year for M&A, and Sneaker Resale Sites: A Hot Category in Midst of Pandemic