Move over, Armani, Dior and Versace. Fashion under lockdown is all about the Able Sisters, three adorable hedgehogs from Animal Crossing.

This was going to be the year Hannah Basile got her fashion game on. Several eons ago — which is to say, in late winter — Ms. Basile, a fund-raiser for Feeding America, a nonprofit food bank, decided that in 2020 she would wear makeup more often and pay closer attention to TikTok influencers and Reddit threads like Female Fashion Advice.

That plan crashed when the novel coronavirus came along and sent everyone indoors for the greater good. “It’s ironic that you want to try a little harder, and suddenly there is nowhere to go,” said Ms. Basile, who lives in Washington, D.C.

Like so many others sheltering in place, Ms. Basile, 27, soon found herself trading the shrunken dimensions of real life for the blissfully unlimited horizons of a virtual one. She picked up a Switch she had barely bothered to touch before and got herself a little island on Animal Crossing: New Horizons, the Nintendo game that has captivated a hunkered-down world.

Since making its debut on March 20 as the latest release in a long-running video game franchise, Animal Crossing: New Horizons has dominated all conversation on gaming social media, registering double-digit percentage growth in Twitter conversations (38 million tweets by one recent count) and topping trending charts in the United States and around the world. It has also made Switch consoles all but impossible to obtain.

“It’s now the No. 1 most-talked-about game in the world, dethroning the likes of Fate/Grand Order, which held that title for nearly two years, and Fortnite,” Rishi Chadha, the global head of gaming content partnerships at Twitter, recently told The New York Times. It is quickly gaining on Call of Duty: Modern Warfare as the best-selling game in the United States, although it was released only six weeks ago.

It is easy to understand why. Each player in Animal Crossing assumes the role of a lone human on an island populated by roly-poly anthropomorphic animals. Players are encouraged to construct their personal paradise, filling it with houses, shops, bridges, assorted landscape features and even neighbors. There is no shooting, no winning, no debt that cannot be readily paid off in the bells that are the local currency.

No one trolls you on your candy-colored Animal Crossing idyll, where players spend their days gardening, decorating, visiting friends and dressing up, the kinds of things few are able to do these days in real life.

It is a curious turn of events that a video game may unseat the top names in fashion in our consciousness, and yet that is exactly what has occurred. Nowadays when talk online turns to style, as often as not the names that come to mind are not Armani, Versace or Dior but Mable, Sable and Label Able.

These are, of course, the adorable hedgehog sisters whose virtual shop has become an obligatory daily destination for millions who can barely remember what it feels like to step into a dressing room.

Ask the actress Brie Larson, who tweeted in mid-April that she now changes clothes more often in Animal Crossing than in real life. Ask Elijah Wood, whose avatar turned up recently on an island belonging to someone with the Twitter handle directedbybryian — who in the game goes by Jessa — to trade bells for turnips and pick fruit while dressed in purple sneakers and a preppy blue button-down shirt.

Ask the designer Christian Siriano, whose recent appearance on Animal Crossing in a tuxedo gown was followed by a Twitter challenge to his 400,000 followers to showcase their best virtual fashion moments.

“I shop at the Able sisters’ every single day,” said Ms. Basile, who noted that, at a time when the daily pedometer on her smartphone barely registers 200 steps, the game has provided her with both a welcome outlet and something more fundamental to the act of getting dressed.

“Stuck in our houses, we are missing out on all the social cues that help us see ourselves,” reflected in the subtly appraising eyes of others, she said. “In a way, we’re using fashion in the game to remind ourselves of who we are.”

In Ms. Basile’s case, it is that person who likes funny, goofy clothing, the “girl in the bright pink tiger-print dress.”

For the designer Sandy Liang, who recently sponsored a pop-up shop on her island, it is a consumer who hankers for playfulness in a fashion world that often takes itself too seriously. At the pop-up shop, she offered Able Sisters get-ups alongside creations digitally customized using in-app game tools by her friend Paige Rubin, the director of luxury buying for the New York vintage shop What Goes Around Comes Around.

“Being able to dress up in whatever way I’m feeling that day and talk to the animals makes me happy — I don’t know why or care why,” Ms. Liang said. “Yesterday, I bought a frog helmet and some paw boots, and it made me want some paw boots in real life.”

Firing up her Nintendo Switch last week, Tara Mustapha, 38, a game developer in London, found an invitation awaiting her to a fancy-dress Animal Crossing party; on arrival, she encountered a delightfully ragtag assemblage gotten up in Able sisters designs. There was a monocled dandy, a Supreme label queen, a beach babe in a pineapple dress and bunny ears, an avatar dressed as Frida Kahlo, complete with unibrow.

“One of the interesting things about the game is it’s relatively free of gender,” said Ms. Mustapha, whose Glow Up studio develops games with inclusivity as their goal. “It allows you to choose your own pronouns and represent yourself freely. You can escape into that.”

Escapism is without question a force driving the success of Animal Crossing, which, although Nintendo has yet to release sales figures, became the top selling game in March and is already ranked second overall this year, after Call of Duty: Modern Warfare, according to NPD Group, the market research firm. Just as startling is the fact that, in breaking free of the confines of a four-walls existence, most Animal Crossing players find themselves racing willingly and headlong into mundanity.

“I am super-suffering since obviously there is very little impetus to put any emphasis on my clothing now,” said Mattie Brice, 32, a game designer, critic and self-professed clotheshorse. “So now I log on every day to see what the Able sisters are offering.”

Given that the Able Sisters’ inventory changes daily on each individual island, an active barter economy has tended to spring up organically, along with an accompanying one of gift giving. “I get so much emotional satisfaction from the styling process and seeing people in their mode,” Ms. Brice said. “Because it’s kind of like living with other people, there is a prosocial conversation that happens in this ecosystem.”

John Fiorilla, a video game composer, still can’t decide whether he is a fashion “summer” or “autumn.”

When, for instance, a friend spots one of the kimonos Ms. Brice often wears in real life (but that, for some reason, are never stocked on her island shop), she will send a message for her to stop by.

And should one of John Fiorilla’s friends come across an Able Sisters look that seems suited for a man who calls himself a “sartorial dunce,” he will likely find the bells to buy it for him.

“I’m the kind of person who never knew before if he was an autumn or a summer,” said Mr. Fiorilla, 29, a video game composer and a pale-complexioned ginger. Though he still may not know his fashion “season,” there is a good chance, Mr. Fiorilla said, that he will be adding some yellow pants resembling an Able Sisters purchase to his real-life wardrobe as soon as the quarantine ends.

“When you start the game, it actually is like landing on a deserted island,” said Oliver Hong, 30, a game designer in Brooklyn. “Your fashion choices are limited.” 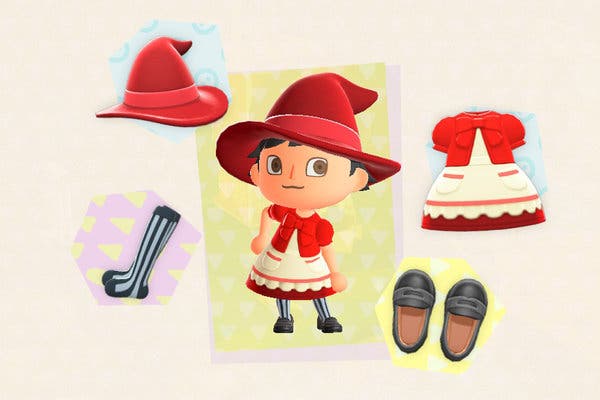 Still, it was only a few hours into Mr. Hong’s initial play session that a friendly villager from a neighboring island turned up with a green sports jacket to give him. From there, he began building a wardrobe in earnest, doing simple chores to earn bells for splurges on the latest drops from the enterprising hedgehogs.

Now virtual dressing has evolved for Mr. Hong into a form of “wish fulfillment.” In the largely gender-neutral sphere of the game, he feels at liberty to add a French maid’s uniform to his avatar’s closet because, why not? “I can strut it and not worry how anyone perceives me,” he said. “In one way or another, the game is always affirming you.”

And in that, Animal Crossing diverges from many mainstream video games, with their dark, often macho aesthetics and their emphasis on supremacy and combat.

“It’s not very game-y,” Jeff Petriello, 33, a video game producer who also teaches at the Tisch Center for the Arts, said. “On a fundamental level it’s less about competition than about bringing people together in sharing, and fashion is a huge part of that.”

Not long ago, a friend stopped by Mr. Petriello’s island dressed in the white throwback sweats of a 1990s rapper. At the time Mr. Petriello’s avatar was wearing a plaid dress, a baseball shirt and a floral crown.

“It’s all about self-expression through design and what it means for you to have the cutest island and the cutest look,” Mr. Petriello said. “I saw my friend Boris, and I thought: ‘Damn! You have your whole thing going!’ That brought me joy.”

MADE Trends is a fashion trend forecasting agency based in NYC. Merchandising and Design Experts (MADE) specializes in trend forecasting and market positioning foresight for the fashion and retail market. Delivering researched and highly relevant insight on market conditions, emergent opportunities and key products. MADE bespoke reports help clients to identify and capitalize on current and future 25 market trends.  For your industry-specific forecast, please contact us.