Consumers may not be in the shopping mood, but enough of them, it seems, view sweatsuits and yoga pants as essential items alongside toilet paper and sourdough starter.

Athleisure looks have emerged as the uniform of choice for the housebound and activewear brands are benefiting, with increased e-commerce sales helping to partially avoid the economic devastation much of the fashion industry is experiencing during the coronavirus pandemic. Sell-through rates of tracksuits are up 36 percent this year through March, compared with the same period in 2019, according to tracking firm Edited, while activewear sell outs were up 40 percent in the US and 97 percent in the UK year-on-year during the first week of April. Activewear companies like Gymshark and Bandier have seen overall business improve over the past month, Earnest Research data shows.

But elastic waistbands won’t reign forever. The whole sector — and vulnerable players in particular — will need to figure out how to keep the momentum going once the lockdowns lift.

Pre-pandemic, activewear was already a hot market. Euromonitor predicted sales would rise by nearly 5 percent CAGR through 2024, double the rate of growth in the apparel market as a whole. And while many brands are cancelling orders placed with their factories prior to the lockdown, many smaller sporty labels can’t keep up with demand. 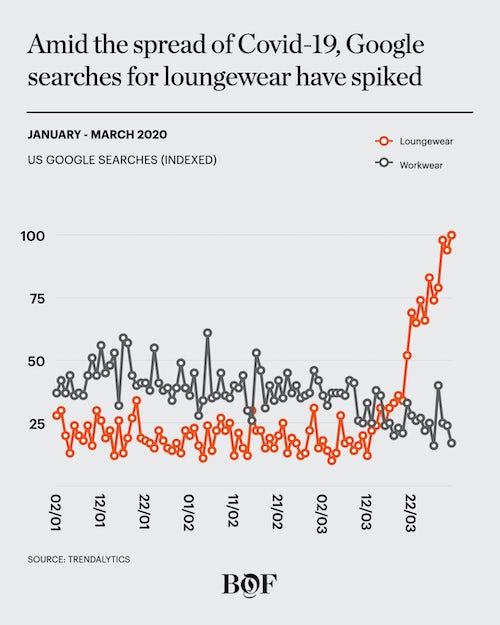 Yet there’s no telling how long this demand will last. Economists are predicting deep recessions across economies like Europe and the US, where tens of millions of people lost their jobs over the last month. Consumers are becoming more conservative with their spending, and there’s only so many matching sweatsuits they’re going to need. Larger brands with extensive store networks are particularly vulnerable as it will be hard to recoup the large volume of physical retail sales losses.

Many brands are already planning their next moves, even as they ride a rush of e-commerce sales.

US label Live the Process, which sells fashionised bodysuits, ballet leggings and knitted sweats, is looking to permanently boost its direct sales, said Founders Robyn Berkley and Jared Vere. Before the pandemic, about 60 percent of their business came via wholesale. But with stores closed and key stockists like Net-a-Porter not shipping product, the brand’s own website is experiencing an influx of sales. The brand has also seen an increased return on digital marketing, attributed to an increase in social media engagement.

Vere said the company owns its supply chain, operates its own factory and warehouse, which make it easier to meet the surge in online orders.

“We always erred on the side of caution and have grown very carefully,” he said. “That’s a reason why we’ve weathered this pretty robustly to date.”

SETactive, a two-year-old activewear brand that uses drops to sell matching sets of yoga leggings and crop tops, is on track to meet its goal of tripling sales to $3 million in its fiscal year ending in May. Founder Lindsey Carter said her latest drop, released March 27, has already seen 75 percent of her 20,000-unit order sell — this is roughly eight times the amount of sales during the 4 week period after every drop since inception (drops are released every six weeks).

While bigger players lack the flexibility of small digitally-native names, they’ve also fared better than many traditional apparel retailers, with stocks of market leaders Lululemon and Nike generally performing better than most clothing brands. The former, for instance, is vertically integrated — meaning it mostly sells through its own stores — and has $1.1 billion in cash with no long-term debt. As a result, the company is still planning for growth, said CEO and Director Calvin McDonald on a recent earnings call.

“There is a high percentage of our business that is core, which means we’re able to hold and continue to sell for a much longer period of time,” he said. “We’re less dependent on the need to flush out inventory.”

Nike’s sales increased by 7 percent in the last quarter, despite the pandemic’s grip on its key growth market, China. The company said it would use what it learned in the country to navigate challenges in Europe and the US, including an increased focus on digital and customer engagement. (For instance, it has made its paid streaming service on the Nike Training Club app free for the time being.)

Not (All) So Easy

While activewear brands may be grateful that they’re not entirely irrelevant at the moment, there are significant challenges to address both now and later. Companies already facing financial challenges prior to the disruption — such as Outdoor Voices — will only see those exacerbated now.

But businesses currently well-positioned won’t have it easy, either. The pandemic forced Carter to put her plans to scale SETactive on hold. The factories she works with in Los Angeles are closed, delaying new lines of sweatsuits and additional products she was hoping to launch this year.

“If this is going to keep going on for the next couple months, we’re going to be pretty impacted,” she said. “I’m assuming that it’s hundreds of thousands of dollars that we’re losing out on.”

Plus, as a social-media driven brand, not being able to shoot new products has presented another hurdle. The brand has had to use photoshop to repurpose old content in new colour ways, while also highlighting home-made content from influencers and brand fans.

Nevertheless, many activewear start-ups have the advantage of being digitally native; their focus on social media marketing and online sales will serve them well in a crisis that has forced most stores to close. Live the Process has seen user generated content double over the past few weeks, said Berkley, which she attributes to a surge in live streamed content on Instagram, featuring fashion influencers working out while wearing the brand.

Brands that rely on stores have a different set of challenges. Since Lululemon stores across Europe and North America closed on March 16, the company has seen e-commerce growth accelerate, “but it’s obviously not recovering all the volume loss from our store networks being closed,” said McDonald. Data from Earnest Research, which tracks US consumer credit and debit card purchases, shows that stateside sales at Lululemon are down 55.5 percent over the four-week period ending April 8. In response, the company is dialling back on non-essential expenses, adjusting marketing spend and evaluating future buys to reflect dampened demand. It’s also using its empty stores to ship out e-commerce orders.

Meanwhile, Nike saw inventory rise 7 percent to $5.8 billion in the third quarter as a result of the spread of Covid-19 in China, according to financial market data firm Refinitiv. Under Armour, which was already suffering with inventory and expense issues before the coronavirus pandemic, has seen stocks plummet over the past two months. Store closures are “contributing to a significant decline in revenue,” Under Armour CEO Patrik Frisk said in a recent statement, resulting in temporary layoffs and executive pay cuts.

Multi-brand activewear retailer Bandier was forced to shut down its seven stores, which generate nearly half of its sales. Yet increased digital sales and recent website relaunch have helped its online business grow almost 170 percent, while sales for the four weeks ending April 8 have increased 93.6 percent, according to Earnest Research. The company is also donating some inventory to a charity rather than discounting it.

Bandier Co-Founder Neil Boyarsky has a conservative view of how quickly retail will rebound. For the time being, the business shifted its long-term strategy to up its e-commerce presence. This means thinking of digital service products as a way to boost customer engagement over this period, like live streaming classes. (A major draw at the physical retail store has been the daily workouts on offer.) Ultimately, this will provide support to customers during this difficult period, and help foster loyalty, he said.

[Brands] have to be careful to not just focus on pushing product, but really understanding what the consumer wants.

It’s an approach Nike has already seen success with. When the coronavirus broke out in China, the company closed over 5,000 stores in the region. Yet it leveraged digital apps like the Nike Training Club, which offers a range of tailored workouts, to continue to connect with local consumers.

Weekly active users for Nike activity apps were up 80 percent by the end of the quarter. High engagement with the activity apps among Chinese consumers translated to engagement with the brand’s e-commerce app, seeing Nike’s digital business in China up by over 30 percent, Chief Executive John Donahoe said on a recent earnings call. Digital sales have only accelerated since Nike-owned stores reopened in China, he added. App revenue was up almost triple digits by the end of the quarter.

The company is hoping for similar results in the US and Europe while stores are closed as a result of nationwide lockdowns, launching digital marketing campaigns promoting health, fitness and wellbeing during this time, and offering US Nike Training Club app users a 90 day premium subscription for free.

Many brands, from Gymshark to Alo Yoga, have started live streaming their own workouts on social media. During the first week of Lululemon’s store closures in Europe and North America, nearly 170,000 people tuned into its live classes on Instagram. Other brands, including Sweaty Betty, are also hosting live digital Q&A events with therapists and cooking demonstrations.

Certainly, of all apparel companies, activewear brands are in a unique position to lean into the health and wellness conversation, one that’s only gaining momentum. If brands listen to what their digital consumer communities want during this time, they’ll be in a better position to flourish after the pandemic has passed, said SETactive’s Carter.

“They also have to be careful to not just focus on pushing product, but really understanding what the consumer wants,” she said. “That’s what’s going to keep the momentum going once this is all over.”